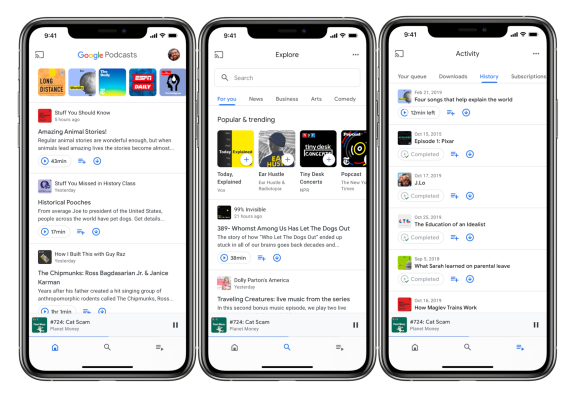 Just in time for our collective house arrests, Google has unveiled a redesigned version of Podcasts. The revamped version of the app is centered around discovery, broken up into three primary tabs.

There’s Home, which features your current feeds; Explore, which offers up popular and curated shows; and Activity, which offers a deeper dive into listening habits. Honestly, though, the big news here is that the app is finally landing in the iOS App Store.

Launched last summer, the app quickly became the top podcasting app on Android, because, well, Google. There’s been some limited cross-platform availability by way of a browser. Obviously, native app support is much more appealing for iPhone and iPad owners looking to see what kind of alternative Google is offering to Apple’s own popular Podcasts app.

Users’ listening habits on the app will be syncable across platforms by way of the Google Podcasts for Web. The iOS version is available for download starting today. The Android update, meanwhile, will be rolling out to users this week.